The following is from the Aberdeen News Herald, December 12, 1974.
Written by Mr. Charles G. Hamilton

(The first picture is from the newspaper article. Other pictures were added for this page.) 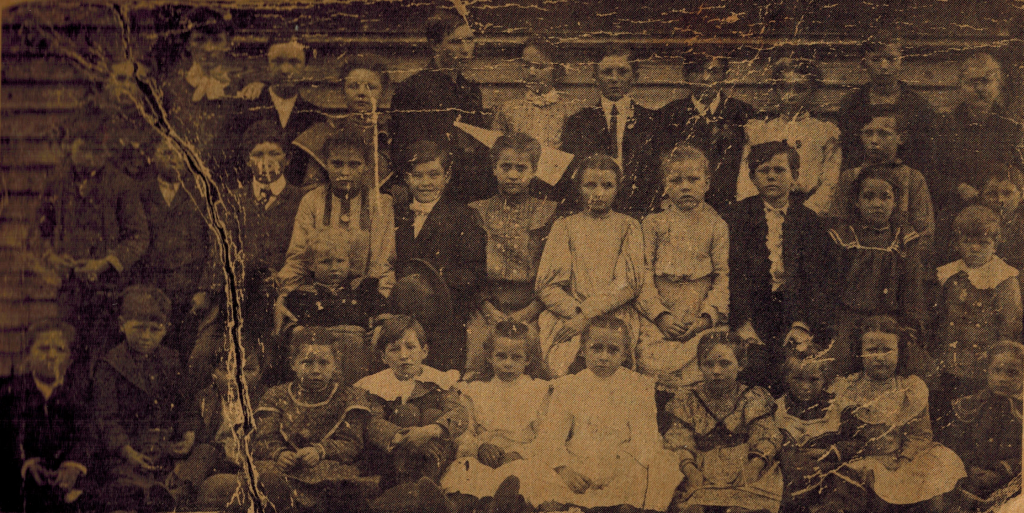 "Still sits the schoolhouse by the road, a ragged beggar sunning" – so John Greenleaf Whittler remembered a school of long ago. Still sits by the road from Quincy to Hatley a large old school which has been there most of this century. It is one of the older church buildings in the county, although replaced in recent years by a nearby attractive structure. The old church and school building was altered in later years to serves as a chicken house but the lines of the original building preserve their strength and dignity. This is the Rocky Springs school in which children spent many happy hours which they recall over the long years.

Rocky Springs is the community between Weaver and Halfway Creeks, which often isolated it in the old days, and it developed a distinctive character of its own. The church branched off from Harmony Baptist Church around 100 Years ago and it was the community church, because it was the only church in this all white community. This was one of the few communities in which the church and the school were the same for more than half a century.

The church was only a few years old when the school was set up in it in 1871, as one of the original public schools of Monroe County in the state public school system begun that year. The church was then one half a mile west of south of the present school building. It was on land given by the Gibson family, who lived next to the church and the first teacher was, naturally, a Gibson. After some twenty years the church and school building was moved a little over half a mile northwest, between the location of the third building and the present church edifice. The second building was a little log cabin which Mrs. Greeley Faulkner of Splunge and others remember well. 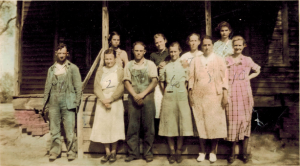 The simple strength and dignity of the third building enclosed a large room, about the size of four small classrooms, and whose spacious atmosphere was markedly different from its predecessors with their crowded quarters. It was substantially built of lumber from a nearby mill. The pupils were warmed by a large wood stove. Parents brought in a supply, but when it ran low, the boys were sent to the woods to cut firewood.

Rocky Springs was unusual in that it did not have a convenient spring or well. Its fine spring of cool water was way down the hill back of this building and not easy to access. You almost slid down in getting to it and you had to hold to saplings to climb back up the hill. In later years some boys were detailed to bring the water for the pail and later for the cooler.

The community of small farms was widely scattered over hill and bottom and pupils walked many a weary mile. Perry Hill, who walked daily four miles and back from Sims Crossing on the railroad, had the longest route. When the school at Lundy’s Chunk burned in 1904 and the school replacing it was farther north, several of its former pupils were sent to Rocky Springs. Icie Hamilton, now Mrs. Greely Faulkner recalls a daily journey of 2 ½ miles across the bottom and over Weaver Creek on a footlog provided, thoughtfully, with handles.

The school day ran from 8 to 4, with recesses in the morning and afternoon and an hour for lunch. Molasses in the midst of jelly in a jelly glass was a treat to add to the usual biscuit, molasses, sausage, and cold boiled potatoes. Pupils learned much from hearing other classes recite, year after year. It was a one teacher school until its last decade, when the closing of some nearby school, probably Sims, resulted in an increase in attendance. The event of the week was the Crosspelling which replaced classes Friday afternoon and which many parents enjoyed. They also crowded the school at its closing for a program of recitations by everyone from the smallest up, after the teacher had provided the pupils with candy for the last day. 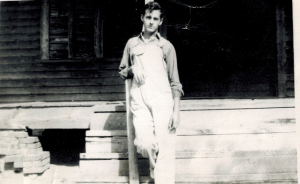 One of the founding fathers of Rocky Springs Baptist Church currently identified as “Ross”. Circa early 1930’s

The major recreation was baseball, townball and Andy Over, while the little children played their usual games. Basketball was a rougher sport when it came in. Ern Tubb recalls when his relative Jack Tubb, later state superintendent of education, broke Ern’s leg by accident in a basketball game in 1918.

Some of the big boys would stir up the little boys to fight each other at recess and at lunch and especially on the way home. If the teacher discovered this, the big boys paid for it. You got in trouble in school if you even turned around. If you got a whipping at school, your parents gave you another when you got home for getting the first one. Some teachers pulled hair and even pulled it out. Discipline was a major problem of the school and whipping a standard routine. Some former pupils say they remained afraid of their teachers the rest of their lives.

One teacher was whipping a girl with a long, keen switch when he accidentally broke a lamp. He then gave her another whipping for causing him to break the chimney. The lady teachers were as effective in punishment as the men. Whippings were so regular that parents frequently came to school in what they called a “court” to discuss the punishment of their children. The court usually decided in favor of the teacher.

The first teacher was B.P. Gibson, who lived by the school. L.L. Gilleylen, whose family farm was the largest in the area, seems to have taught from 1874 to 1883, and again in 1887. The first record of enrollment is 35 in 1882, with 28 in average attendance. F. Finney and Mamie Lockridge were next followed by Mattie Tubb, an aunt of Ern Tubb, whom some remember still. Lucien Parham was next. The 1890s began with a Miss Wh8itney teaching forty four, the highest enrollment until the latter years. Alice Carter, Annie Williams, J.W. Hall, C.W. Leverett, J.B. Kendrick later a doctor, John D. Dabbs, and J.W. Keen finished the century.

Mrs. J.B. Jones and Mrs. Clifford Jones began the new century followed by Avery E. Stone, father of Ruby Stone of Prairie. Icy Hamilton began school here under him. Zettle McKinney was the first to teach in the large building, from 1905 to 1908, and is remembered as a wonderful teacher. They and their successor, Willie Pruitt, now Mrs. John Smith of Mount Zion community, enjoyed long and fruitful teaching careers in Monroe County. So did Nelson Glenn, who taught from 1909 to 1911, Nell Birmingham, the daughter of Bob, for many years pastor of the church, followed T.R. Palmer and preceded Iris Arnold and Homer Swann. Andy Hill, the father of Mrs. Myrtle Shumpert, the lady who served longest in the courthouse, and who himself served as tax assessor and sheriff, gave the community the benefit of his genuine wisdom during the war years. Charles Leverett was the next, and became the rural mail carrier for decades.

Alice Hamilton (Mrs. Zuma Kirkpatrick), who had transferred from Lundy’s Chunk in 1904, taught from 1918 to 1920. Then came Zula Sims and Theola Wygul, from just across the Itawamba line Carolina, better known as Mrs. Cooper Cantrell, Gena Gregory, who followed her, became Mrs. Ira Carter. By 1924 Rocky Springs was large enough to merit three teachers, Russell Pearce, Seretha Parrish and Mattie Tubb. Madgie Dill came along in 1926 with John H. Sullivan, who had a long teaching career in several schools on the east side of the county. In 1927 the school was consolidated with Hatley, although some of the pupils preferred to attend Greenwood Springs and Quincy Schools. 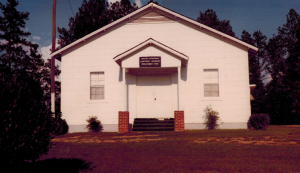 The Rocky Springs church, with its attractive new building and active membership remains the center of the community. The school building stands, although the school has gone into the mists of memory, but the men and women whom it taught are together in the church which furnished the school and which still gives the inspiration.